What is Technical Diving?

Technical diving itself has always been about adopting new technology [and/or techniques] to help safely and efficiently extend the range of any given diving endeavor. Things like nitrox, mixed-gas, staged decompression, and rebreathers of today have all run their course in becoming progressively more standardized tools of the trade.

In the Hands of the Diving Scientist

Within the occupational setting of scientific diving, where diving is used as a tool to gather data for the advancement of science, adoption of progressive technology and techniques can be very, very slow given the bureaucracies of the institutional realm. This leaves the majority of progressive program development coming from the private sector. At the same time, private sector innovations are needed to take science to new depths, and even new frontiers. The gap that lies in this technology transfer is the bottleneck for future advancement in human intervention.

To make substantial advancements in ‘technical diving for science’ today, our community is in need of a massive paradigm shift that again puts humans at the center of underwater problem solving across the spectrum of depths, distances traveled, and within novel environments. While not a replacement for undersea robotics and autonomous vehicles or sensors, ‘the human element’ is forever needed to provide the value of experience, reaction time, situational and spatial awareness, and immediate problem-solving and response to change.

Ocean Opportunity Inc. was born in response to some of these challenges, and keeps ‘the human element’ central to its evolving programs. We engage in developing new policies, drafting standards, funding related R&D, and demonstrating new techniques through productive programs that advance scientific exploration and lead to the new discoveries that improve our quality of life. 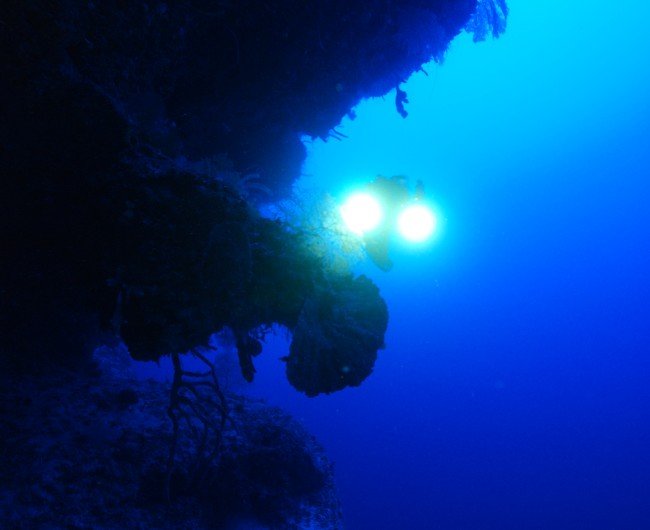 It's a matter of perspective...

For almost a century, underwater science has been built upon an average dive time of just 45 minutes. This is represented by the yellow bar above. This very limited human-underwater interaction has resulted in thousands of studies, millions of observations and data points, and billions of dollars in commerce and associated public policy.

These short 45 minutes of dive time are due to limitations in technology and human physiology – both of which can be overcome with a focused initiative and investment in to improving human intervention. Above, to the right, represents these ‘productive’ 45 minutes spent. With increasing depth, we incur decompression obligations which is generally unproductive time spent. Obvious in this visual representation is that the cost and complexity of enabling that mere 45 minutes at depth quickly becomes impalpable. 45 minutes at just 190 feet of depth comes with almost 4 hours of total dive time to safely decompress and surface, and similarly 45 minutes at 300 feet of depth can cost a full day or more. These dives are indeed made, but the cost exceeds the value – it’s a losing proposition.

Exploring these limits in human physiology sets the foundation for all diving technology research, though often comes with disregard as a priority vehicle for subsea intervention.

Why? Well, cost, complexity, and perceived risk to begin with. However, the opportunity MUST not be overlooked.

The value of putting a person there, on site, with their eyes and hands interacting within that space is needed to interpret new environments, think critically about solving new problems, and to challenge us all to better understand humanity and it’s role here on the Blue Planet.

That’s where we live, and work, and where we plan to take you…

Help us to Redefine the Human Element

Bridging the gap between scientific, commercial, and recreational diving with new technologies will help place humans at the center of underwater problem solving.

Read More about 'the Human Element' in Ocean Exploration

Today was our local fire department’s ‘Fill the Boot’ day to raise funds for Muscular Dystrophy research, awareness, and community support. As I dropped in my handful of cruddy change from the cup holder in my truck I couldn’t help but reflect back on our work with Matt Johnston and his Diving a Dream project to help realize his dream of becoming the world’s first ventilator dependent diver. At the time of Matt’s journey kicking off – about 15 years ago – his dreams of overcoming the challenges of Muscular Dystrophy to submerge underwater were all pie in the sky... Read More
Bill Streever’s “In Oceans Deep” hits the nail on the head, referencing from the very beginning that the book tackles “humanity’s presence beneath the waves”, and later concluding that “…a key role remains for manned expeditions…inspiration”. Embodied within those two sentiments is a chronicle of several pivotal moments in human intervention’s history and across various modes of diving – free-diving, manned submersibles, saturation diving, undersea habitation, atmospheric suits, and robotics as human proxies. Albeit unfortunate, the aquatic world is not full to the brim with writers, particularly those who can convey elements of historical fact through storytelling that is interwoven... Read More
For those following my various blogs and bramblings, yes, I am still very much on a Blog hiatus, though felt compelled to make a few short key strokes today…seeing as it’s my birthday and I do love to write, I may as well write. As many of my days go, it was spent on on and underwater, grinding it out to make a decent living and with the very fortunate perspective of experiencing our planet in a unique way for the bulk of the day. The day started with me jumping in my boat and seeing a very shiny object... Read More
During my recent Blogging hiatus, I shifted my time allocated towards writing to bottom out a long overdue book project., and am pleased to share here that ‘Closed Circuit | Open Sourced’  is now published and available on Amazon.com. I’ve been diving closed circuit rebreathers for almost 20 years, having realized the strong potential for the technology to open new doors for humans operating beneath the sea. I’ve been somewhat fortunate to be what they call ‘an early adopter’, having moved toward their use at the start of the 21st century during a time when the technology was still considered... Read More
Underwater living… it’s perhaps the start of the lineage of work that many of us have embarked upon, and still remains a vision for the future. “Why?” one might ask… While the Atlantean dreamscape painted of a life beneath the waves of some utopian tropical paradise flirts with the outskirts of fantasy, the practical side of taking up a subaquatic residence still presents numerous challenges. Human physiology, building materials, ongoing husbandry, life support, power, commerce – all of this, and more, have proven to thwart much scale-able effort in practice, though the dream is still held close by those who... Read More
What an emotionally exhausting week for all in the dive community, as we, with the rest of the world, awaited the rescue of the 12 boys and their coach from the flooded Thai Tham Luang cave system. First things first – a HUGE applause from the entire world is owed to all of the divers involved, the full rescue team, and of course the Thai SEAL team is owed a debt of tremendous gratitude accepting the sacrifice of one of their own and still moving forward with such a humanitarian act of selflessness. On one hand its unfortunate that it... Read More
I’ve written a fair bit about rising tides, seafaring states, and Atlantean futurisms here within this Blog over the years. The topic has become ever more relevant as we see the very real impacts of rising tides around the world. I’ll keep this one short. The following has been circulating around the digital universe recently, and it’s well done: https://scubadiverlife.com/10-breathtaking-underwater-cities-explore/ Let’s face the music on this one… While some cities on the list were intentionally sunk (behind a dam for instance), others have been swallowed by rising tides – some cataclysmic, and others as sea level continue to rise with... Read More
Taking a short break from the intensity of Olympic curling, I thumbed through Netflix this weekend and was pleasantly surprised to find Leonardo DiCaprio’s documentary “Before the Flood”. I’ll be honest that I’ve often viewed celebrity backed cause documentaries with some question as to the motive, but DiCaprio proved me wrong with this one…well done. His lifetime and heartfelt environmental advocacy showed through quite well, and he presented a very well unbiased representation of varying world views on climate change and its resulting impact. He also shed some light on the sense of urgency for us all – the stakeholders... Read More
‹ Previous 1 … 19 20 21 22 Next ›