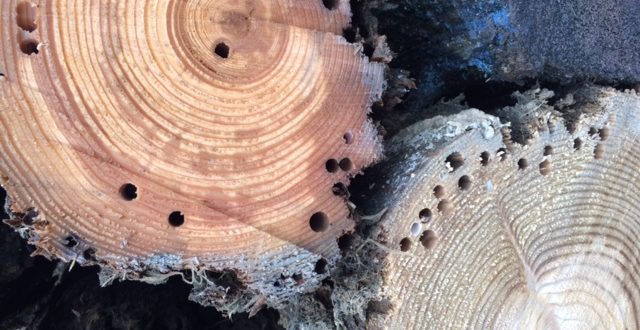 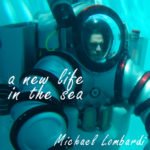 Ahh, the glamour and high life promised to we commercial divers – international travel, becoming part of fabled sea stories, mega-buck paychecks –  boils down an inconvenient truth; boring worms aren’t (or at least shouldn’t) be that boring. For every one of those fabled sea stories that turns into a reality, there are at least a hundred mundane tales grounded in the reality that commercial diving ain’t all it’s cracked up to be…

There are several routine tasks inshore divers face, and certainly routine conditions encountered while performing those tasks. Last week’s (and next week’s) work involved cutting several hundred timber piles just above the mudline to make the waterfront more aesthetically pleasing for a condo development. The piles we part of a previous pier and marine terminal, probably 75 years old or more, and presented a hazard to navigation and have been an eyesore for decades. It’s nice to see that efforts such as this are taking place way up in Narragansett Bay near Providence, as similar efforts throughout the state have made a really positive impact. In just 20 years I’d have to say average underwater visibility has doubled in distance (indicating cleaner water) which has been the result of cleaning up our coasts, dumping less, and promoting the enhancement of fisheries – principally shellfish aquaculture – that are re-seeding the local watershed from the ground up. It’s been amazing to see this change over two decades, and brings with it some appreciation for the value of the work we often take for granted as the routine and boring stuff.

As much as I say conditions are improving, it doesn’t take much mucking around at the edge of the channel headed in to the Port of Providence to arrive at black out conditions. So, what does this mean for playing with an underwater chainsaw? Well, like many working dive tasks, setting yourself up for success is the name of the game – establishing a work area and work flow that lends itself well to the diver using his situational awareness for maximum productivity and safety. In this case, the variables include a crane with rigging overhead, a chainsaw with hydraulic lines, and the diver’s umbillical. These three loose items need to be in the middle of the action, but positioned to where the diver will not accidentally cut any of them while working blindly. Further to that, the diver must be positioned so that once a cut is made, the cut pile won’t swing into him/herself causing a potentially serious injury. Add in old fishing hooks and other harbor debris and its just a grand ol’ time down there…you have to love it and find the value in the work to see it through day after day.

For me, I like the challange of placing a human [myself] in that environment and not just performing, but also finding the artistry of moving through the work area and performing continuously and with precision. There are some added values however – as routine as the tasks can be, the immersive experience is hardly boring. The biologist in me takes advantage of any down time in between cuts to observe the encrusting marine life on the pilings and on the bottom, and try to better understand the ecology of this natural environment that has overcome a man made structure. And then – back at the surface, a quick look at my handy work reveals all…the not so boring boring worms. 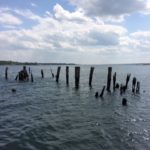 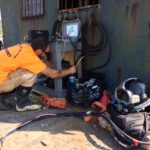 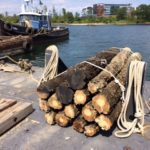 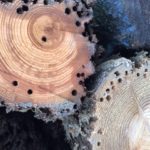 When we inspect pilings for damage, we typically see ice damage (from surface water freezing/thawing and splintering the wood), erosion, and worm damage. Worm damage is caused by wormy creatures that eat the wood pilings, leaving hollow tunnels that can expedite pile deterioration and eventually lead to a pile that is entirely disintegrated and not structurally sound…underwater termite-like activity if you will, and very impressive to see. Boring worms are not so boring…

These are the perspectives that absolutely must be shared by those who are entrenched in the trades – there is no robotic detection, no textbook, and no means to experience this part of the aquatic world without literally diving in…to a new life in the sea.